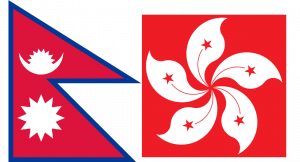 We Bring The Good Unity Of Business Entrepreneurs To Life

The chairman was selected by the floor, Mr. Indra Wanem, the General Advisor of NCCHK, and the AGM were started.

The AGM had passed the proposal. The details of the member facilities are described in the directive.

Proposal 2: Meeting date
The AGM had decided to change the meeting date to every First Wednesday of the month.

At the last session, the Chairman of NCCHK Mr. Lab Kumar Gurung provided his speech, thanking all to members.
And close the AGM by the AGM Chairman Mr. Indra Wanem.

Nepal Chamber of Commerce Hong Kong organized a seminar – “Arabica Coffee from Nepal” with a vision to promote Nepalese products in Hong Kong. This seminar’s mission was to Promote Nepalese Coffee beans to the HK market and further meet new customers. 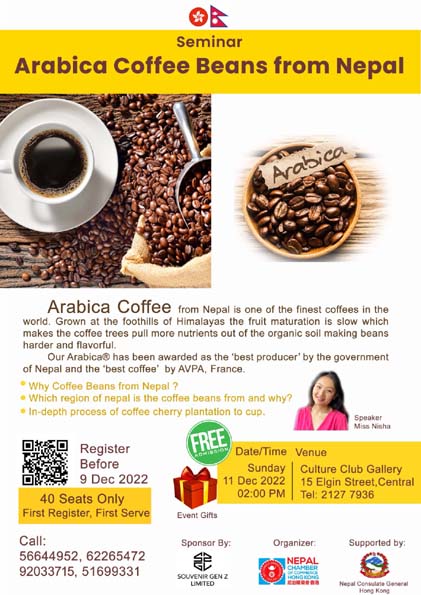 Arabica coffee is one of the finest coffees in the world.  It has grown at the foothills of the Himalayas. The fruit maturation is slow which makes the coffee trees pull more nutrients out of the organic soil. Organic soil makes beans harder and more flavorful. This Arabica-registered coffee has been awarded as “the best producer” by the government of Nepal and “the best coffee” by AVPA, France.

In the seminar session, Miss Nisha presented the slide and talked about Arabica Coffee.

In the break session taste of coffee had been distributed and at the end of the session, an Arabica coffee pack had been gifted to all attended participants.
Program rundown:

Nepal Chamber of Commerce Hong Kong’s 5th installation program was held at Yak and Yeti Restaurant Jordan under the chairmanship of Mr. Lab Kumar Gurung. At the event, the Honorable Chief Patron of the organization, Consulate General of Nepal, Mr. Uday Bahadur Rana Magar, inaugurated the program lighting Diyo Batti in Panas. The Nepali national anthem was played immediately after the inauguration. Patron, Mr. Ved Bahadur Khadka, and outgoing president Mr. Dasu Ram Parajuli, and various officers from different organizations were present at the program. Mr. Dhiraj Kumar Rai, Vice President of the organization, gave a speech during the program. The program was conducted by the General Secretary Mr. Shashi Madan Rai.

In the first phase of the program, the officials who were outgoing took a seat and distributed certificates of appreciation by the chairman. The outgoing officers were Chief Advisor Mr. Pritam Shrestha, Advisor Mr. Hejen Rai, and Executive Committee Member Mr. Shiv Sah. To make the program attractive, local artist Miss. Ayushma Rai presented folk dances at different times of the program.

In the second phase of the program, the newly appointed advisers and executive committee members were welcomed by the past advisers and past members by giving garlands and shaking hands. Mr. Dasu Ram Parajuli, Immediate past president, was installed as the newly appointed chief advisor by Mr. Pritam Shrestha, Immediate past chief advisor. Other advisors installed were Mr. Indra Wanem, Dr. Chura Thapa, and Mr. Rajesh Bhimsaria. There were other nominated members also installed. Mr. T.B. Yakkha, installed as an Editor of Media Reporter from Bagaicha.com.

At the end of the program, General Secretary Rai described the Chamber, its benefits for the members, and the future program of the Chamber. After that, Patron Mr. Bed Bahadur Khadka and Hon’ble Chief Patron, CGN, Mr. Udaya Bahadur Rana Magar offered their best wishes for the Chamber. In the end, Mr. Lab Kumar Gurung, the president, closed the program.

Nepal Chamber of Commerce Hong Kong’s 5th convention was held at above date, time and venue. In the convention, the closed session was operated by a presiding committee under the chairmanship of Mr. Jagannath Gyawali (the patron and former president of the NCCHK). The other presiding members were Mr. Pritam Shrestha (Chief Advisor), Mr. Krishna Pandey (advisor), and Mr. JB Okhrabu (Advisor).

In the election session, an election board was formed under the chief coordination of Mr. Hejen Rai (Advisor) to conduct the election. Other members were Mr. Gokarna Dhakal, Mr. Hem Limbu, Mr. Indra Wanem, and Mr. Basant (Bipin) Rai.

In the end, since there was no rival candidate in the election of the executive committee, the following 10 councilors were elected unanimously under the chairmanship of Mr. Lab Kumar Gurung. Mr. Gurung from Sankhuwasabha had been in Hong Kong for a long time doing various businesses including Asim Consultancy Company and Interactive Construction Limited. He was the current first vice-president of NCCHK 2016.

At the end of the program, the Chief Election Officer was sworn in the oath to all the winning candidates and closed the convention.

The activities in nutshell: